Brazilian Jiu-Jitsu is primarily a ground-fighting art. Most techniques involve both fighters on the mat. There is a heavy emphasis on positional strategy, which is about which fighter is on top, and where each person’s legs are. Positions are stable situations, from which a large variety of techniques are available to both fighters. The primary positions include:

Guard: The person applying the guard is on the bottom with his back on the ground; his legs are wrapped around his opponent’s hips (who is said to be “in the guard”). • Side control: Chest-on-chest but without the legs being entangled.

Mount: On top of his opponent (who “is mounted”), sitting on his chest, with one leg on either side of his torso.

Back mount: Behind his opponent, with his feet hooked around his opponent’s hips and upper thighs. Specific techniques taught are designed either to improve one’s position (for example, to “pass the guard”, by going from being “in the guard” to getting around the opponent’s legs, resulting in side control); or else as a finishing submissions. Most submissions are either chokes (cutting off the blood supply to the brain) or arm locks (hyperextending the elbow, or twisting the shoulder). 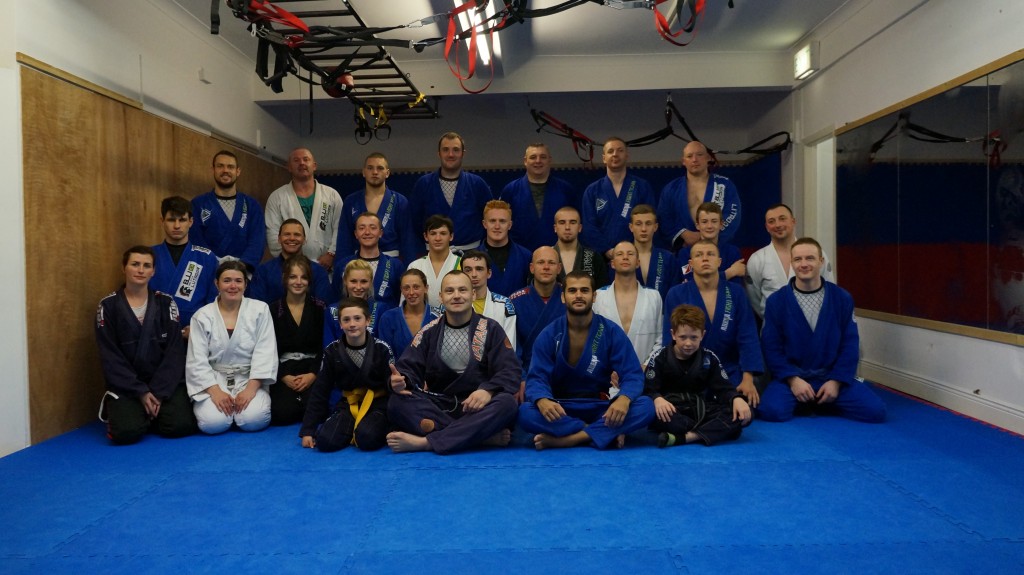 Here at The Arena we hear horror stories of people being injured in martial arts dojos/gyms due simply to ego. We at The Arena don’t believe in that.

Every member at The Arena is a team member and training partner. It’s our job to keep everyone healthy and happy so that we can all grow and help to improve each other.

The Arena is based in Wexford to teach regular Wexford people Brazilian Jiu Jitsu. If we wanted to teach experts we’d move to Brazil.

The vast majority of our members had zero experience in BJJ when they started, and so our teaching style is catered for beginners. We have years of practice taking people with zero experience and transforming them into competition winners.

But I just want to lose weight.

It sounds strange right? Enjoying doing burpees and push ups and grappling but once you’re motivated with a team behind you it’s not even about the exercises. It’s about working out in a good atmosphere, with good people and feeling your mind and body growing.

Free rolling in Brazilian Jiu Jitsu is one of the very best exercises because you’re using all of your body muscles but you don’t even feel like you’re ‘exercising’. You’re just thinking about how to ‘win’. Let your competitive spirit do the work and you enjoy the rewards.

We asked our team what their first day in the gym was like.

Here’s what they had to say, unedited.

What you’ll need to bring to your first class

a bottle of water

a towel (because you will be sweating!)